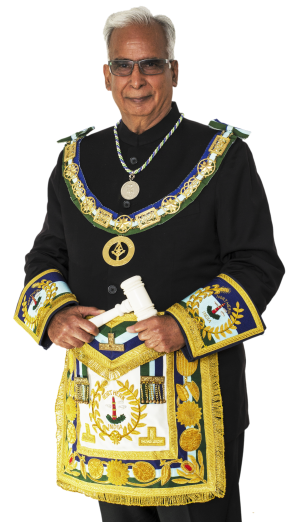 He was born on 12th May 1952 in Dehradun. He had his Graduation in Commerce from Delhi University and thereafter qualified as Chartered Accountant.

R.W. Bro. Sanjiv Gandhi saw the light of freemasonry on 31st January 1992 in Lodge Triune Brotherhood No. 42 and adorned the Eastern Chair in the year 1998 and thereafter held the office of Treasurer. He is also member of Lodge Dharma No. 208, Lodge Mewar No. 259 and was a founder member of Lodge Lewis No. 383.

He was exalted in to the Royal Ark Masonry in R.A. Chapter Faridabad No. 70 on 19.12.1996 and was a founder member of R A Chapter Accountants No. 110 and was installed Principal Z; in the year 2005-06. He is also Past 2nd Grand Principal in Supreme Grand Chapter of India.

His organizational capabilities are well recognized as he successfully managed the affairs of several Annual and Half year Meeting in his capacity Chairman of Steering Committee for several years. He has, recently, been entrusted with the responsibility of reviving the Rohilla Star Masonic Charitable Dispensary at Faridabad with has been non-functional for quite some time.

He is married to Manju, who is an educationist by profession and manages a Primary School. They are blessed with a son who is happily married and settled in US, and employed with Coca Cola Corporation as H.R.Head for Latin America. W. Bro. Rishav Gandhi was initiated in Lodge Star of Delhi No. 328 and later occupied the eastern chair in the Lodge. W. Bro. Rishav Gandhi was also a founder W. Master of Lodge Lewis No.383.